The International Driving Permit/International Driving Licence/IDP is a grey booklet, a bit like a passport, which allows you to drive in a foreign country with your own national photo licence. (If you don’t have a photo ID licence I’d advise getting one- you may have problems renting a car with only a paper licence).

The document is about the same size as a standard passport and is essentially a multiple language (usually English, French, Spanish, Russian, Chinese, German, Arabic, Italian). translation of the permit-holder’s normal driver’s license, and includes a photograph and stamp from the issuing office. It is not a license to operate a motor vehicle on its own.

International Driving Permits are governed by three international conventions: the 1926 Paris International Convention relative to Motor Traffic, the 1949 Geneva Convention on Road Traffic, and the 1968 Vienna Convention on Road Traffic. The differences between the permits are complex but from a user’s point of view, the 1968 convention permit is valid for 3 years after the issue date. The previous two versions are only valid for one year. When you apply for an IDP it’s likely the outlet you obtain it from will ask which country(s) you’re visiting and will advise accordingly on which permit you need.

The UK Post Office offer an online checker to advise which permit, if any, you will require, though if your trip will cover more than one country, you’ll need to advise them of that when applying for the IDP in person. 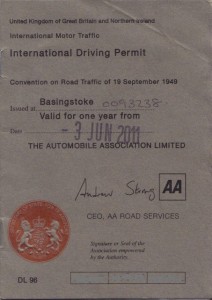 There has been much speculation in the UK press that British drivers will need an IDP to drive in Europe from 1 Jan 2021. As at the time of writing (March 2020) the situation is still unclear. It may be that an IDP and insurance green card is needed for some countries, but its equally as likely that a reciprocal agreement with EU Nations mean one isn’t required. The UK Foreign office have set up an email alert system to receive the most up to date information-

The IDP is available from a variety of sources –

In the UK, from the AA, RAC and larger post offices.

In Canada,from the Canadian Automobile Association.

In Australia from the Automobile Association of your home state

In most other countries, the IDP is available from the national Automobile association or Automobile or touring club

The IDP can usually can only be applied for up to 3 months before your date of travel.

The main benefit of the IDP is to overcome language difficulties, particularly if your home country licence is written in a different alphabet to the country you’re visiting. Many of the ‘official’ rules above seem to be ignored in many countries. If you’re using a local car rental company, my suggestion would be to ask them whether you really need an IDP. If you use one of the big multinationals or a brokers site, unless you manage to get the email address of the actual supplier, its unlikely you’ll be able to find this out. In my experience, given the low cost of an IDP its generally wise to obtain one before you travel if you don’t speak the language or if you’re visiting a country where you’re likely to be stopped often by the police/army (Eastern Europe/Africa/Asia).